Book 29 of 52: The Perfect Crimes of Marian Hayes by Cat Sebastian 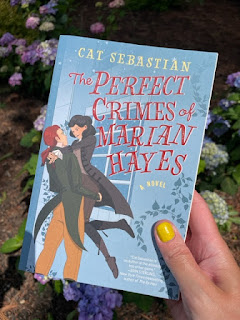 As I've written (many times) before, romance novels have a bad rap. Opinions are based on books from the 1970s, of bodice rippers with virginal heroines who find sinuous pleasure.

That not all romance now, and wasn't even then. Instead, looking at the entire genre, there's everything from from "sweet" romances that don't even involve kisses to those that are all about kink and/or multiple partners.

And of course there's queer romance. I can't say I'm an expert on this subgenre, but I have enjoyed the books of Cat Sebastian. The Perfect Crimes of Marian Hayes is the second in her "Queer Principles of Kit Webb" series, about a group of Robin Hood-esque thieves in Georgian London.

In this entry, we have Marian Hayes, the Duchess of Clare, who just shot her husband. Our hero is Rob Brooks, a highwayman and con-artist who had previously tried to blackmail Hayes because he knows that her (now dead) husband was a bigamist. After a series of letters that quickly turn flirty, they join forces, and then, well, join.

Both leads are what we today would call bisexual, though they don't use that term (ditto for previous Sebastian characters who are trans, gender non-binary and asexual). It's not quite the case with this pair, but in Sebastian's other novels, queer relationships are seen as something that lives outside the very narrow lines of that society and culture, almost on the same level as why a Duke can't marry his char woman, even if they're in love.

Sebastian writes, of Hayes' thoughts: "And that wasn't quite what she wanted, but she didn't know what it was she did actually want, other than some improbable way for two lives that didn't seem to have smooth edges to somehow fit side by side."

I don't know how historically accurate this all was, especially when sodomy was illegal in England until 1967. But a "oh of course these relationships existed," almost blasé stance, is refreshing to read, especially during this Pride Month were the rhetoric about queer people is growing increasingly violent, and drag queens are being attacked.

"'The countryside is exhausting to look at in summer,' she said, wiping raindrops from her face with the sleeve of her coat, 'with every flower and tree competing for one's attention. And it looks precisely the way one expects it to, with sheep dotting every hill and every  branch heaving with leaves. It's already achieved whatever it's going to achieve.'"

"I love every prickly, sour, difficult inch of you."

I probably should have read the first book, well, first. It would have made sense since the protagonists of that one are characters in here too. I did pick it up yesterday, though, so expect it to appear on the blog at some point in the future.