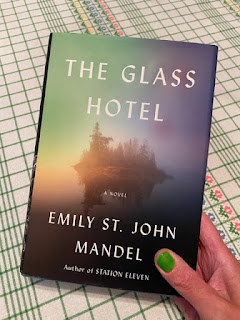 And still we read on.

I'm not going to pretend it's not shit right now, and that I'm not incandescent with rage. But I know that reading is one of the ways that I have become a better person, and that books can bring about a lot of good. They can impart information and education, build empathy towards other people, or just be a means of escape. We're need those things. We're going to need them, maybe even more in the future.

The Glass Hotel by Emily St. John Mandel is the follow up to wildly successful - and also reviewed here - Station Eleven. It's another overlapping, interweaving story, this time with a young woman named Vincent, whose mother disappeared while canoeing, at the center. Everyone in the book is linked to her in some way: her half brother who struggles with addiction; a Bernie Madoff-esque villain who uses Vincent as a prop when retaining and attracting investors; and the victims of his crimes. It's more about catastrophe than finance, though St. John Mandel writes about "countries" and not in the sense of geographical boundaries.

"You know what I've learned about money? I was trying to figure out why my life felt more or less the same in Singapore and it did in London, and that's when I realized that money is its own country," Vincent's wealthy friend said.

The Glass Hotel follows people as they slip out of one country into another. I liked it. It wasn't soul shattering like Station Eleven, but not every book needs to be. It's a very good read.

I'll also note that St. John Mandel is building a multi-verse of sorts. Miranda Carroll from Station Eleven is also in this book as a very minor character, while her boss, Leon Prevant, gets a much bigger part. I sat up a little taller when I read this, of Vincent: "She'd read newspapers all her life, but she felt that she was desperately undereducated and wanted to be an informed and knowledgable person, but in the age of money she would often read a news story and find herself uneasily distracted by the opposite: Imagining an alternate reality where there was no Iraq War, for example, or where the terrifying new swine flu in the Republic of Georgia hadn't been swiftly contained; an alternate world where the Georgia flu blossomed into an unstoppable pandemic and civilization collapsed."

My friend Jessica Dershowitz interviewed St. John Mandel about The Glass Hotel as things were falling apart in March 2020. I don't want to quote from the interview here because it's a bit spoiler, but here's the link. I believe the same is for Sea of Tranquility, which came out this year. I like to go into books with as little pre-knowledge as possible, so we'll find out! I imagine I'll be reviewing it on here this year or next.