Book 33 of 52: The Blue Diamond by Leonard Goldberg 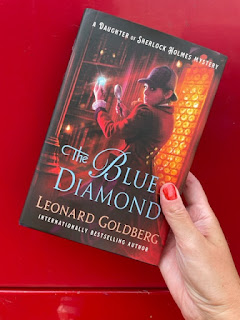 How many more stories can we wring out of Sherlock Holmes & Co? Quite a few, it turns out.

The Blue Diamond is the latest installment in Leonard Goldberg's "Daughter of Sherlock Holmes" series. Like the original works of Sir Arthur Conan Doyle, these books are "written by" by Dr. Watson, except this time, it's the son of the original John Watson, who is married to Joanna Watson, the daughter of Holmes and Irene Adler. Joanna and the Watsons live together at 221B Baker Street, in a household run by the same Mrs. Hudson. Together they - what else? Solve crimes.

Is this all far fetched? Or course it is. That Holmes had a daughter at all, and with Irene Adler, and that Joanna grew up not knowing it, is a leap. But whatever way Goldberg got to this arrangement of these characters, we're here. In this mystery, Joanna and the Watsons are investigating the disappearance of 3,000 carat flawless blue diamond, which turns out to be just the start. It's not the only thing missing, and possibly a link to a spy working against England's interests during WW I (which is when this book is set).

I'm sure there are more easter eggs in these books for those who are very familiar with the original stories, but even if you're not or have a passing interest like I do, they're...fine! Aggressively fine. I have read every one, and snapped this up as soon as it came out.

It also shows that there are new ways to interpret what seem like out of date stories, if the current reader is kept in mind. The recent-ish BBC Sherlock accomplished the same thing by setting the show in modern times with an outrageously talented cast. The movie Mr. Holmes did so by asking a what if...at the end of Sherlock's life.

I saw that movie by myself in the theater on a very hot August afternoon. The experience reminded me that I can pull a Don Draper and go to the movies whenever I want. I saw Thor: Love and Thunder yesterday. It's a nice thing to do when I just need a break.

1. He reported on the running of the 1908 Olympic marathon, which set the 26.2-mile distance in stone. Before then, it was 25ish is miles. But because of the wild finish, where one competitor was helped across the finish line then disqualified, some very smart folks decided people might pay to see a rematch, which 20,000 people did in Madison Square Garden two months later. Of course it had to be the same distance. And voila: 26.2 miles (I wrote about why exactly 26.2 for the Philadelphia Inquirer in 2014).

2. He had a huge falling out with Harry Houdini over spiritualism. Conan Doyle, who created the most rational fictional thinker of all time, believed that we can talk to the dead. Houdini, who made his name and living off illusions, did not. The wonderful podcast Criminal did an episode on this. I highly recommend you check it out.