Book 35 of 52: Where the Deer and the Antelope Play by Nick Offerman 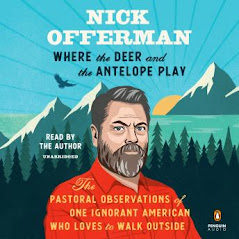 I have so many thoughts about Where the Deer and the Antelope Play by Nick Offerman that I'm going to number them.

1. It's not uncommon for celebrities to partner with ghost writers for their books. I don't mind this — in fact, I think it's a good thing. A celebrity has a story to tell and hires a professional to help them tell that story in the best possible way means we get a better book, and a pro writer gets paid. However, that's not the case here. Offerman calls himself a "humorist" and is a pretty good writer. I listened to and loved Paddle Your Own Canoe and also The Greatest Love Story Ever Told, which he co-wrote with his wife Megan Mullally (Good Clean Fun, which is about woodworking, fell flat to me, though I listened to it while running a 24-hour race, so that vibe might be related to what I was doing at the time). I think I need to read his books in physical form. His voice? Fantastic, of course. But I love listening to celebrities read their memoirs, and his celebrity isn't the driving factor here, nor is he really telling a "celebrity" story. I'll have to think about that for the next book, which I'm sure he'll write.

2. I had a bit of professional jealousy while reading this. I want to get a book contract by saying I'm going to go hike in the woods with my friends, but I'm not Nick Offerman, and my friends also aren't Booker Prize winning author George Saunders and Wilco frontman Jeff Tweedy. I want to get a book contract to write about driving across the country, but — again — I am not Nick Offerman, and my co-pilot is not Megan Mullally (he did say he's taking Saunders' writing classes, and I appreciate him saying that he works on his writing craft like the rest of us schlubs do).

3. The "contract before the book" made this feel a little bit patchy. In one section, he goes hiking with Saunders and Tweedy. In another, he visits English sheep farmer and author James Rebanks. The "I'm doing this to write about it!" feeling clung (again, seeing point 2). I'm not sure what the rest of the book was going to be because the pandemic changed everything, which prompted him and Mullally to buy an Airstream trailer they nicknamed "The Nutmeg." Of course "contract before the book" books happen all the time — Eat, Pray, Love by Elizabeth Gilbert is one — but I could see a bit of the seams here.

4. Offerman grapples with some of the same things I do: I am also a person who loves to go outside and loves doing so in National Parks. I have a Passport to Your National Parks and am trying to see not just the big National Parks but also the national historic sites, monuments, seashores, battlefields, etc. As of this writing, there are 423 such sites and I have been to almost 200. I like the parks. I have the swag. But their formation was a heinous trauma to the people who were on the land first. John Muir, founder of the Sierra Club who spearheaded the conservation movement of the late 1800s, did so by taking land away from Indigenous populations, and said a lot of horrible racist things. He worked with President Teddy Roosevelt to make that preservation happen, which he did by taking away Native lands by federal decree. And here we are now at a time when yes, the parks have preserved important spaces, but to serve us. Some are so crowded that they require a timed entry to get in. The Blue Ridge Parkway, which I have driven, brings people to beautiful views and vistas, but most often by cars, which are damaging the same environment the park sets out to preserve. I'm set to go to Isle Royale National Park in September, by boat. It's great that the island is protected. But what about the fuel it'll take to get there? And what about the fuel it'll take to get me to get myself to Michigan? Offerman writes about this tension throughout the book, including about hiking in Sedona and being overtaken by mountain bikers, and then Pink Jeep Tours. He's mad, and I don't blame him, but he and Mullally have also taken helicopter sightseeing tours. He drives an SUV to pull his trailer in the same way I have an old Jeep Wrangler that I drive to reach places I can't in my Subaru Impreza. Are we bad? I was again reminded of The Good Place, and how it's impossible to be 100% good when our actions have too many reverberations and potential consequences. I've been noodling with a piece on this myself, and while I don't think Offerman and I say the same things, I'm glad I read his perspective on being someone who enjoys the parks while realizing the have not always been a benevolent good (speaking of The Good Place, Offerman was originally offered the part of Sean, as I learned from the show's podcast. I'm glad he didn't take it because Marc Evan Jackson was so good, but I thought you might also be interested in that).

5. Offerman is forthright in loving the works of both Wendell Berry and Aldo Leopold, and it seems like he's trying to carry their torch, but I think he gets a bit too didactic. I was rolling my eyes on some places (and because I was listening while doing laundry and driving, I wasn't able to turn down the corner of the page — hence why I may read a physical copy the next time). There's a lot about food, and he cites Michael Pollen, which is someone I wrote about on this blog years and years ago. The podcast Maintenance Phase recently knocked down some of what Pollen wrote in Omnivore's Dilemma, including revealing that one of the people he profiled is, well, bad. I did appreciate Offerman chronicling driving cross country during the pandemic, because I think it's important to have those records (my COVID diary is now 302 pages single spaced). But sometimes he tips a bit too far over into preaching for my tastes.

6. In case you skipped to the end to find a nail polish recommendation (which I don't have because this is an audiobook): I generally liked this book and think Offerman has some inserting things to say, even if I don't always agree with him.

And since I know some of you come over to this blog via my freelance writing newsletter: Offerman is now penning a column for Outside magazine. I wonder if they also won't pay him on time?