Book 36 of 52: Murder, She Wrote: A Question of Murder by Jessica Fletcher and Donald Bain 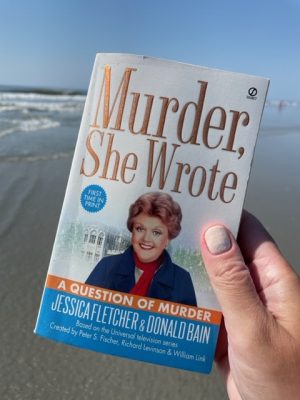 In January, on my way to Key West, I stopped at Connie’s Bookshelf, a wonderful used bookstore in Daytona Beach Shores. I picked up an assortment of paperbacks, including Murder, She Wrote: A Question of Murder by Jessica Fletcher and Donald Bain. Yes, “Jessica Fletcher” the fictional murder mystery writer/murder mystery solver from Cabot Cove, Maine, is listed as an author.

I, like many people, loved Murder, She Wrote. I’d caught episodes here and there when visiting my grandparents, then binged a few seasons at the start of the pandemic (at the time, I couldn’t figure out how to stream the whole thing, though now all 12 seasons are on Peacock). I liked the pattern of the show. I liked the familiarity. I appreciated that Jessica Fletcher was a runner, and that she dressed in a way that the kids today find cool. In 2020, I also read Angela Lansbury’s 1999 authorized biography Balancing Act, where she shared many tidbits about the show, including that after toying with romance for Fletcher, she preferred that the character stay single (I wasn’t writing this blog then, but I did run a twitter thread about it while reading it if you’re curious).

ANYWAY. This book was $.50 cents, so why not? I finally got to it while down the shore last week, and it was a delight. In it, Fletcher attends a writer’s conference/murder mystery fan event at a supposedly haunted mansion in the Berkshires. The event includes a play, which turns into murder when the actor isn’t fake shot, but real stabbed. And since a snowstorm has closed the road in and out of the estate, the candidates for murderer are all trapped in the house together. It’s a classic whodunnit.

Now here’s the fun part: I figured that this book was long out of print, not just because of its and condition but also because of its price. It also came with a sticker warning me that I couldn’t return or get a refund for it.

Except, surprise! This book, which was published in 2006, is apparently still in print. Not only that, but the series is still going! The 55th book, Murder, She Wrote: Death on the Emerald Isle, will be published in January. Fletcher has her own author’s page on the Penguin Randomhouse site, and has been “working with” Terrie Farley Moran since 2020.

Mystery fans are probably shaking their heads at my ignorance, but I can’t know all things! And I think most readers of this blog would also be surprised.

I do love the covers, which appear to be images of Lansbury with elements added, like a tennis racket: 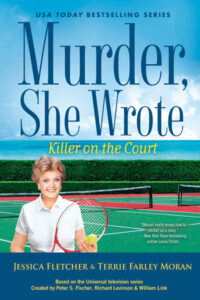 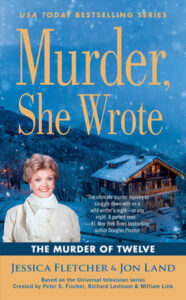 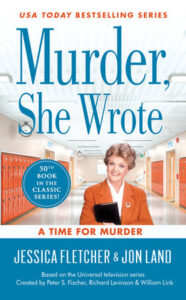 And my favorite: a plaid coat and a scarf: 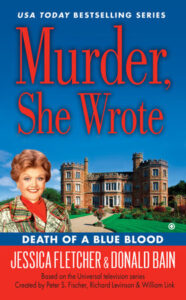 If you think I’m making fun of the series, I most certainly am not. I really liked A Question of Murder, and I’m delighted that Jessica Fletcher lives on through it beyond just twitter gifs (though reading about her using Google in A Question of Murder was a bit of a jolt). After I wrap up this post, I’m going get a few more. Sinking into a cozy book is not a bad idea, especially right now. And re-living a warm experience of something I shared with my grandparents, who have all since passed, is a bit of a comfort too.