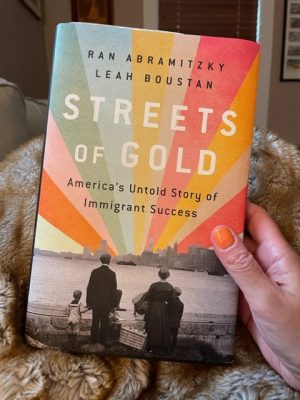 I read Streets of Gold: America’s Untold Story of Immigrant Success by Ran Abramitzky and Leah Boustan for work, so I’m not going to go too much into it here right now. When the piece is out, I’ll add a link to this post, and also write a new one so those of you who read this chronologically don’t miss it. [JEN NOTE on November 6, 2022: Here it is]

But you can get a very good idea of what’s in the book via this recent New York Times piece that distills their research and data, showing via interactive graphics that a lot of the fear mongering about today’s immigrants is just false.

Instead, I’m going to share how a piece of this book is related to one of my side projects. For two completely different reasons (and no I’m not telling you those reasons), I’ve been working on histories of both sides of my family. I learned — as many people had through Abramitsky and Boustan’s work — that what’s been passed down to me isn’t 100% accurate.

In building a family tree, I found out that my maternal grandfather was named Antonio at birth, which he or his parents changed to Anthony somewhere along the way (and despite the persistent myth, no one’s name was changed at Ellis Island). I also discovered that his parents didn’t settle directly in the Pittsburgh area upon arrival, but first to Cincinnati, which I found via their petition for naturalization. I was also able to confirm which of my great aunts and uncles were born in Italy and which were born in the U.S. Not a huge deal, but it helps paint a more accurate picture of their immigration story (most of this part of my family, including my great grandmother, were alive when I was born, so they were real people to me!)

On the other side of my family, in looking through old newspaper records, I found that one of my paternal great grandfathers died at a much younger age than we thought (plus the details of his death), which in turn meant my paternal grandmother was left without a father at a much younger age than we thought. She died in 2019 and never spoke about her father (I was warned not to ask). I now have a better understanding of who she was, and what she’d lived through.

It’s not all bad either. In putting together my maternal family tree, I uncovered that my Italian great grandparents came from the same town as my hair stylists’ family, which is fun, especially because I am hoping to go to Italy in 2023 or 2024 and visit that area.

I also learned that most Italian Americans in the Philadelphia area are descendants of southern Italians who came over in the late 1800s/early 1910s. It’s probably who you think of when imagining a stereotypical Italian. When I was spending a lot of time in South Philly, my then-boyfriend’s neighbors thought I was lying about my heritage or it had been completely diluted by my father’s side, because I have blond hair and blue eyes. But so does a big chunk of my Italian family! It didn’t make sense until I put the pieces together to show my ancestors are from a more central part of Italy, and only put down roots in Philadelphia after WW II, when Antonio/Anthony finished his military career at the Philadelphia Naval Yard — and stayed.

Given my line of work, the idea that stories get turned, even slightly, away from the truth over time is not surprising. Memories are faulty, and things get mixed about when passed onto the next person — and sometimes people lie to make themselves look better. In learning how to write obituaries, I was told to never take anything anyone said at face value for these reasons. When I wrote this piece about Audrey Sutherland as part of the New York Times’ “Overlooked” series, I couldn’t just rely on what her children told me. I had to find records, including her father’s death notice, and proof of her military employment (I had a researcher assigned to helping me, thank goodness). It all checked out, but it doesn’t always. One obituary writer told me she would be told Aunt X graduated from Y college, only to discover they’d dropped out; or that Great Uncle Z said he was given two Purple Hearts when he was actually dishonorably discharged from the military. Whoops.

If you are curious about what you were told growing up, you may want to do a bit of digging too — and if you like digging into the past, you can also join the Resistance Genealogy movement, which finds genealogies of people saying things about immigrants to show that the things they’re saying apply to their ancestors.

What about DNA testing, you might ask? Not my area of specialty (I refuse to do it because I don’t want private equity to own my DNA), but I know a lot of people do. You may want to check out Dani Shapiro’s wonderful memoir Inheritance: A Memoir of Genealogy, Paternity, and Love, and/or her podcast Family Secrets. Not every secret is DNA-testing related, but many are.

I’ll update when the story comes out!