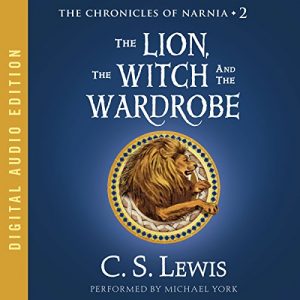 As I’ve mentioned before, I have a subscription to Libro.fm, which lets listeners buy audiobooks through an independent bookstore. With a subscription, I pay a monthly fee for one audiobook a month (plus I get discounts on additional audiobooks should I choose to buy more). Generally, one a month enough for me, but in July I found myself with a week between finishing a book and my new credit going live.

So I turned to the Libby app, which I access for free through my library, and decided why not: I’ll give The Lion, the Witch and the Wardrobe by C.S. Lewis a whirl. If I read any of the Chronicles of Narnia as a child, I don’t remember. As a four hour audiobook, it didn’t seem like a huge investment of time.

And…eh? It was fine. Maybe I wasn’t in the mood for a Christian allegory, especially not right now. I don’t think I can add much to the discourse about it, but I can say that it wasn’t a complete waste of time because I got to listen to the wonderful 2004 performance of the book by Michael York.

Sometimes I mentally clicked out of listening, but was drawn back in by the gusto behind his performance. This is also why I don’t shy away from listening to kids books — and why I used “performance.” It’s not just reading. It’s a show.

I was sad to learn that York as diagnosed with Amyloidsis, a rare blood disease, which has affected his voice. According to the Hollywood Reporter, he and his wife recently moved to Minnesota to be closer to his doctors at the Mayo Clinic. I hope he’s getting the care he needs. And I am so glad we have his audiobook performances, even if I didn’t find the material itself that striking.