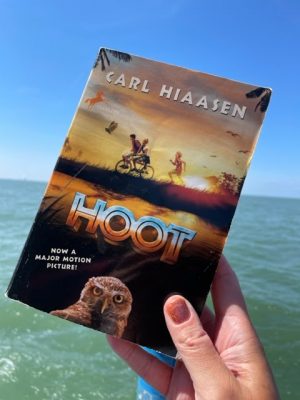 Another boat, another Carl Hiassen book.

Hiassen’s Stormy Weather was book five in this series, from alllllll the way back in January. I snapped a picture of it from the back of a boat speeding off to Dry Tortugas National Park. In that review, I mentioned that Hiassen’s work was ripe for a TV series or movie, especially since he hadn’t had that many. One was a 2006 movie version of his 2002 middle grade novel Hoot. It starred a lot famous people, including Brie Larson, Luke Wilson and…Jimmy Buffett, but wasn’t well received. Hopefully the upcoming Apple TV+ series Bad Monkey, starring Vince Vaughn and Ashley Nicole Black, will fare better.

So when I saw a copy of Hoot in a Little Free Library, I figured why not, and took it with me on vacation. That picture is from Miller’s Ferry to Put-in-Bay, Ohio (when I got on the boat, I realized that most people were going there to party, not to see Perry’s Victory & International Peace Memorial. It was a weird experience).

In Hoot, a group of middle schoolers try to save endangered owls whose habitat is under threat because of development of a new pancake house. It has all the hallmarks of a Hiassen book: the regular guy (or child, Roy, whose family recently moved to Florida from Montana), the guy/child who lives off the land, various levels of bumbling and dedicated law enforcement, and someone trying to get rich quick, who also gets it in the end. But of course it’s all PG.

Slot this book into the “it’s fine!” category, though it’s somewhat depressing to see that what these kids were battling in 2002 — the constant paving over of Florida, wildlife be damned — continues. But there’s no one better suited to write about it, then or now, than Hiassen.