Book 46 of 52: Murder, She Wrote: Debonair in Death by Jessica Fletcher and Terrie Farley Moran 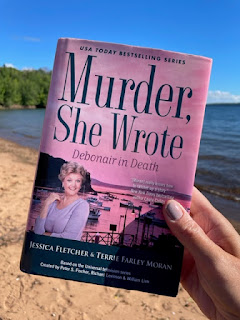 After discovering that the Murder, She Wrote mystery novel series not only exists but is still active, I figured I should try one of the newer titles to see if it's changed over time. After reading Debonair in Death, I can say....not much. But that's what genre fiction, especially series, is supposed to be, right? Like putting on your old running sweatsuit, as Jessica Fletcher still apparently does in 2021 when this book was published.

In this one, the crime is the murder of Nelson, a "from away" co-owner of a Cabot Cove shop. He's found covered in blood, with a young woman who works at the local salon standing over him, also covered in blood. It doesn't make sense that young Coreen could or would have done this, but who else could it be?

Well, anyone! As Jessica both tries to finish her next book's synopsis and clear Coreen's name, smuggling and MI6 also somehow get involved. It all gets a bit silly, but I wouldn't expect anything less.

I am happy to report that despite the dissonance of Fletcher doing things like texting, she's still a fashion icon: "I hurried upstairs, showered, and jumped into a pair of jeans. I tied the sleeves of my blue pullover around my neck, on top of a paid man-tailored shirt. If a chill hit the air, I was ready."

The only thing that irked was a bizarre through line of diet culture. There's a lot of mentions of food, and how Jessica always chooses the healthier option, and even chastised town doctor Seth that he needs to eat better. It stuck out like a sore thumb - or an MI6 agent in Cabot Cove.

It wasn't a bad travel companion. The image above was taken in Bayfield, Wisconsin, and I'm writing this from a hotel in the Upper Peninsula of Michigan, before what I hope is a bit adventure (I say "hope" because this adventure has been cancelled three times before). I have three books I COULD bring with me. Which one will I chose? Stay tuned to find out!