Book 47 of 52: Sea of Tranquility by Emily St. John Mandel 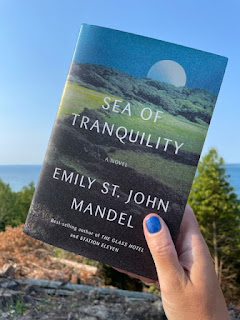 I am back from my trip to the National Parks of the upper midwest, which was lovely. Please see this photo. I took Sea of Tranquility by Emily St. John Mandel with me because I wanted to read it, and also because I associate Michigan with Station Eleven (both the book and show).
Michigan was more beautiful than I could ever have imagined, especially the deep blue waters of Lake Superior. However........I did not like this book.
I think we'll look back on it after she continues to have a very long and successful career (which I think she will have!) as a swing and a miss, one prompted by trying to put this current pandemic into another novel that also has a pandemic. At times, the observations of a specific character read like St. John Mandel's COVID-19 diary (if she kept one). It doesn't translate well.

Sea of Tranquility is about a people in different times connected to what appears to be a paranormal experience: a British ex-pat in 1912 Canada walks into a forest and is briefly transported to something he can't explain. A composer in 2020 makes music to a video his sister took that appears to record the same thing. A writer in the 2203 seems to be on the opposite end of whatever they saw. The same stranger with an undefinable accent visits all three.

It's magical realism, which I don't have a problem with. It's the character of the famous author. Despite being set two centuries from now, she's clearly a stand in for St. John Mandel. She became famous for writing a book about a fictional pandemic, and was out promoting a new book on the brink of a real one. That also happened to St. John Mandel. Her breakout book, Station Eleven, was about a pandemic with a less than 1% survival rate. She then published The Glass Hotel in spring 2020.

Lines from what that character experiences in 2203 sounds like it happened two years ago. I won't share the exact quotes I marked because they give away big plot points, but here's a generic one. "'So I guessing I'm not the first author to ask you what it's like to be the author of a pandemic novel during a pandemic,' another journalist asks."

I'm sure St. John Mandel has been asked that question a zillion times, and I'd be annoyed with it too! But this is not the place for that. I don't know what it, or any of the other specifics about being a pandemic-time author has to do with the story she's trying to tell here. The "tired writer on book tour" is a very boring trope - and I say that as someone who has been on a book tour! It's superfluous here, and threw me right out of the narrative.

With time and perspective (and maybe an editor forcefully saying no), St. John Mandel might have swapped out that character's job - it could have been anyone who travels a lot. But instead we have it here. I'd have read an essay about what it was like to be in her very unique position during the pandemic, but as non-fiction, not a fictional take set in another century.

I've mentioned this book on the blog before, but if you want to read about pandemics in magical realism form, check out the Impossible Lives of Greta Wells by Sean Greer. It's about a woman who travels between three times and what we'd now call the multiverses: the 1918 flu pandemic, the HIV/AIDs epidemic, and her current life.

Greer won the Pulitzer Prize for his book Less, which I also liked, but it didn't know my brain into another stratosphere like Greta did. I tried to read it during the first few months of the pandemic, but I couldn't. Maybe I can now.