Book 49 of 52: Carrie Soto is Back by Taylor Jenkins Reid  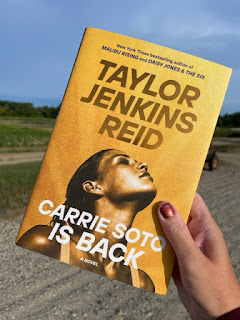 I hate to add another review in a long line of reviews of “it’s fine!” but once again I am here. Carrie Soto is Back by Taylor Jenkins Reid is fine. It’s fine!

I was surprised by the “it’s fine!” quality of the book because that hasn’t been my experience with Jenkins Reid’s previous works. Daisy Jones & the Six, about rock and roll, was the first book I read during the first flush of the pandemic that captured my brain and kept me from doom scrolling. I didn’t like the twist at the end of The Seven Husbands of Evelyn Hugo, which is about a very Elizabeth Taylor-like Hollywood star, but the book was so engrossing that I lost at least one good night’s sleep because I could not put it down. And Malibu Rising! Fantastic! A mix of surf and entertainment culture all rolled into one messy ball. Loved it.

Carrie Soto suffers from being set in a less rich environment. The title character is a tennis star who comes out of retirement in the 1990s to try and reclaim her record of having the most Grand Slams wins ever (not just of women tennis players but of all tennis players). Instead of flushing out more than one character, it focuses almost entirely on Soto — and tennis. Yes, there’s a lot about sexism in sports media (which I know a lot about as someone who wrote in that space for a long time) and the stupidity of the idea that women in their 30s are past their prime, but it’s still about tennis, and it’s just not enough. Is it because I don’t watch the sport? I’d have have felt the same way if Soto was a professional runner. Even though a lot of Malibu Rising is about surfing, it wasn’t the main plot driver. There’s only so much play by play you can do without it becoming repetitive.

Again: not terrible. I still read it only a few days. But it wasn’t that “wash over you” novel reading experience as I’d had with her previous works.

In other news: this blog is getting a refresh, so if things start acting wonky, hang in there. It’ll be worth it for it to look better than the Blogger template I slapped up in January. I will also be adding an email subscription option, which many of you have asked for but I couldn’t figure out how to do. I wanted to see how things went before putting some money into this little project, and I think it’s gone well. I sure enjoy doing it, and sometimes that’s enough.