Book 50 of 52: Priceless: How I Went Undercover to Rescue the World’s Stolen Treasures by Robert K. Wittman and John Shiffman 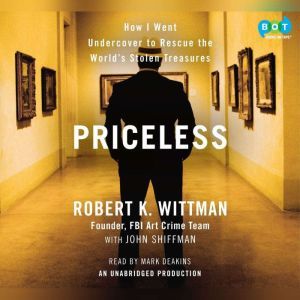 Who doesn’t love a good heist story? And who doesn’t want to listen to a book about heists and exactly how FBI got back said heisted items while driving across the midwest?

I like both of these things, which is how I ended up listening to Priceless: How I Went Undercover to Rescue the World’s Stolen Treasures by Robert K. Wittman and John Shiffman on my recent road trip to the National Parks of Minnesota and Michigan. What a ride — both the book and that vacation. Turnpikes are convenient but wow sometimes very boring. It helps to have something interesting to listen to along the way.Wittman is a former FBI agent who created a niche for himself while still at the Bureau: art, antiques, jewelry and gem identification. While working at the Philadelphia bureau office, he retrieved a startling number of key works — more than $300 million worth, according to his website. Those include Geronimo’s War Bonnet, a Peruvian backflap that had been looted from a tomb, Rembrant’s Self Portrait, a Civil War battle flag carried by the 127th United States Colored Infantry Regiment, and an original copy of the Bill of Rights.

For each recovered piece of art, Wittman (and co-writer Shiffman) show the significance of the item, the harm done when it was stolen, and what bringing it back to their original owner (or whoever is the owner of the item now) means in righting a wrong. He often went undercover, and recounted what the holders of the stolen items said, and their justification for having them (which was never good, especially not the Geronimo War Bonnet. The excuses the guy gave for even having it in the first place — yeesh). Each item becomes its own story and lesson, with the bad guys being caught as a nice bonus (this book was published in 2011 and does not go into stolen items that are still in museums like…well. John Oliver was on the case this week).

It’s not a perfect book. Wittman uses some terms that made me cringe, like calling someone a “hood” instead of, you know, a person. It’s also hard to sympathize with a guy who had a few beers, decided to drive, and killed one of his best friends. I don’t care how many hours elapsed over that many beers — it was a horrible thing to do and someone is dead for it. He’d have been better off mentioning he fucked up and let the story continue rather than spending chapters talking about how it affected his life, and how it gave him an insight into people being questioned by the FBI. Uh, dude. No. You’re alive. He’s dead. Again: no.

Overall, not a bad listen — with that big caveat. And it certainly occupied some time on the various turnpikes it took to get me out to Minnesota and back.

Disclosure: Bookshop.org links are affiliate links. I also know David Kinney, co-author on Wittman’s second book, though I didn’t realize it until I was researching this post.