Book 52 of 52: When We Were Orphans by Kazuo Ishiguro 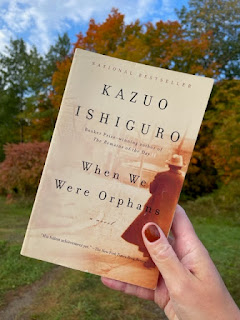 Hey hey! Book 52 of 52! Woooooo! Party! I’m done reading for the year, right? Well of course not. I’m not going to just pack away the dozens of books in my “to read” pile because I hit 52 books for the year. The redesign of this website is still in progress, so it would be a waste to give it a jazzy new look and stop updating. I also hope to start writing different kinds of pieces for the website, including author Q&As. Good things ahead (including an email subscription option!)

But anyway onto book Book 52 of 52: When We Were Orphans by Kazuo Ishiguro. It’s a bit of an odd duck: the diary of Christopher Banks, an Englishman who grew up in Shanghai in the early 1900s until his parents “disappeared.” After moving back to England and becoming a famous detective there, he returns to Shanghai at the brink of WW II to figure out what happened to them. It’s sort of a noir, including a mysterious damsel in maybe distress (and also an orphan). I don’t want to give away the ending, but I don’t think he quite lands it. He adds and element of what happened to his mother at the hands of [x] that felt gratuitous and out of place with the rest of the book.

So: it’s okay, though the bar is pretty high for Ishiguro, who won the Booker Prize for Remains of the Day in 1989, and the Noble Prize for literature in 2017 (When We Were Orphans came out in 2000). His 2005 book Never Let Me Go is one of the best pieces of dystopian fiction I’ve ever read. Clearly, he’s fine! This one just didn’t work well for me.

Nail polish: My Italian’s a Little Rusty by OPI.