Book 53 of 52: From the Mixed-Up Files of Mrs. Basil E. Frankweiler by E.L. Konigsburg 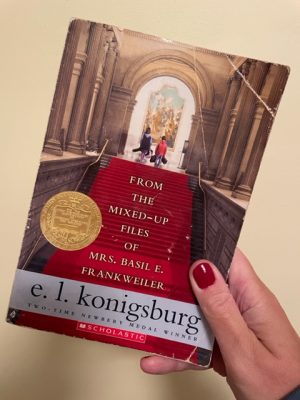 Hello from the shiny new version of Book a Week with Jen! Do you like it? I do. Since I’m going to keep the site going into the new year, it was time to make it look decent (and functional on mobile). I’ve also added a subscription option, so you can get an email the second a new post drops. I hope you sign up!

To celebrate this new look, I come with an old book, but a classic: From the Mixed-Up Files of Mrs. Basil E Frankweiler by E.L. Konigsburg. It’s about Claudia and Jamie Kincaid, siblings who run away from their home in Greenwich, Conn. to live in the Metropolitan Museum of Art in New York City. By using their savings (including winnings from card games Jamie cheated on), and doing things like sleeping in one of the museum beds, and bathing in a now gone fountain from inside a museum restaurant, the pair of course have an adventure, and try to solve a mystery: if marble sculpture recently acquired for $225 is a work of Michelangelo.

The book isn’t told from the perspective of either child, or an omnipotent third person narrator. It’s told by Mrs. Basil E. Frankweiler, who auctioned off the sculpture, as she’s recounting what happened to her lawyer. Just as when I read this as a kid, I sometimes forgot that, until Frankweiler adds, in parenthesis, an instruction to that lawyer.

Of course I loved this book when I first read it, even though this was first published in 1967 (and won the Newberry Medal in 1968), and I don’t think I visited the Met until I was an adult. My memories of going to New York City were of Girl Scout trips to see the Rockettes, and trips with my high school drama club to see a Wednesday matinee of the Chicago revival and The Lion King the years they debuted (yes I’m that old). My mom always insisted that I wear a two layer jacket and zip my money into a pocket in the layer close to my body so I wouldn’t get robbed (one of the first essays I ever published was about this: learning not to fear New York City by going on a date with someone to…the Met).

But back to the book: I was also one of four kids — not the oldest like Claudia but the oldest daughter — who loved museums and could imagine myself sneaking into one and getting away with it for a little while. I flagged this passage while reading it this time, and while this isn’t my original copy (I found it in a Little Free Library) I bet I did when I was a kid too:

“She was the oldest child and the only girl and was subject to a lot of injustice. Perhaps it was because she had to both empty the dishwasher and set the table on the same night while her brothers got out of everything. And, perhaps, there was another reason more clear to me than Claudia. A reason that had to do with the sameness of each and every week. She was bored with simply being straight-A’s Claudia Kincaid. She was tired of arguing about whose turn it was to choose the Sunday might seven-thirty television show, of injustice, and of the monotony of everything.”

Ah, youth. But! This book treats these thoughts and feelings seriously, as juvenile fiction should.

One fun note: the siblings type a letter to the Met about their findings on the statue on an Olivetti portable typewriter that was located on the sidewalk outside a Manhattan showroom. Life magazine set up a camera to capture pictures of people using it. You can see some of them here.