Book 54 of 52: I’m Not Really a Waitress by Suzi Weiss-Fischmann 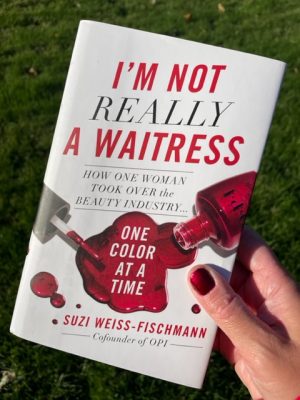 I started doing my nails in 2018, at 38 years old, in a grasp at control. On the night before I was to run a 50K ultramarathon in 83 degree heat — in Pennsylvania, in October — I went to a CVS up the street from my hotel. I bought a bottle of base coat, top coat and Black Onyx by OPI. I was sick from dehydration for two days after the race, but my nails still looked pretty good.

I did my nails sporadically after, and I collected a handful of colors — enough to take up the front of a bathroom drawer. Then the pandemic hit, and I wrote story after story about the exact ways in which COVID killed people, and the systematic failures leading us down the path to mass tragedy. I couldn’t control that, but I could control my fingertips.

Since then, I have done my nails every week (usually on Wednesdays, since that’s my off day from running). I don’t wear makeup, and I don’t color my hair, but I now have more than 100 bottles of nail polish taking up two bathroom drawers. Not only have manicures been a way of covering up damage eczema has done to my nails, but it forces me me to stop once a week and do something that doesn’t involve my phone. And I the results everyday, especially when I’m writing. It’s nice to have some color as my fingers fly over the keyboard. I even made it part of this book blog by matching my color to whatever I’m reading, and listing the polish at the end of each post.

The brand I buy the most is OPI. It’s good quality for the right price, and the names of the colors are fun. When I put I’m Not Really a Waitress on my nails to honor the Phillies being in the playoffs, I decided it was time to pluck I’m Not Really a Waitress by one of OPI’s founders, Suzi Weiss-Fischmann, off my to-read list. I’m glad I did, even if I didn’t like the book all that much. Why? Because I learned a lot, including:

As for the book itself…it was okay. She wrote it with a woman calls her “book partner.” As someone who has occasionally ghostwritten shorter pieces for business executives, and once completely revised a CEO’s self-published memoir, I can guess what happened. Weiss-Fischmann has a story to tell, but other than when she wrote about her family, she didn’t dig very deep. The book is chocked full of business cliches and over the top, adverb heavy writing, and I don’t think all of Weiss-Fischmann’s advice is sound. She write about how OPI was one big family, which — cringe. She also dedicates just a handful of few pages near the end of the book to selling the company, which I wanted to know more about, especially after writing so much about how OPI was a family. How did they feel about losing their jobs or being forced to move to North Carolina? But by that point in the book, she’d was repeating. I felt bad for the “partner,” who probably had to figure out how to meet the assigned word count with not enough information.

It’s a shame. I’m glad I learned some of the backstory of a company that makes products that bring me a lot of joy, but this book should have been half as long, with a little more digging under the surface, to make it a good read.

Nail polish: I’m Not Really a Waitress by OPI.