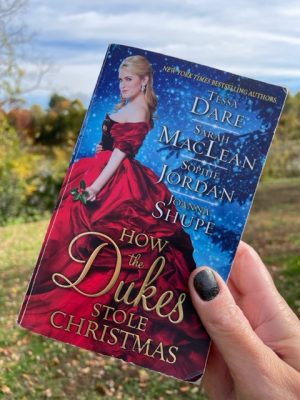 The following things have happened to me in the last two weeks:

And this is on top of all of my fears and anxieties about the mid-term elections, climate change, gun violence, COVID, etc etc.

So, yes, when I picked out what to read next, I dove not just for a romance novel, but a holiday one. I’m firmly in the “no Christmas music until Thanksgiving” camp, but I didn’t care. I needed something to pull my brain somewhere else, and historical stories of romance with snowflakes and velvet and holly and rich people being nice was a way to do it.

I’ve said it before many times, but I read romance novels not because I’m romance/sex starved, or because I need to live vicariously through other people, but because sometimes, especially during spans of bad stuff like this, it helps to sink into the familiarity of a genre the guarantees a happily ever after. Good triumphs evil (to the extent that there is evil in the kinds of books I read) and people are smiling at the end. Hooray.

How the Dukes Stole Christmas is an anthology of four Christmas novellas by Tessa Dare, Sarah MacLean, Sophie Jordan and Joanna Shupe. They all have a duke (of course) and all include a so-called “magical” shortbread recipe that is supposed to make people fall love. But each story is a completely different story, with different levels of “heat.” The duke in Joanna Shupe’s novella, for example, is a late 1800s, New York newspaper magnate named Duke, not a duke in the English aristocracy sense.

And they were fine! I was familiar with Dare and MacLean, Jordan had book 28 in this series, and I hadn’t heard of Shupe. I liked her story enough that I bought one of her stand alone novels, which you’ll probably see on the blog in the near future.

Thank you, romance novel writers, for providing a respite. I don’t know if the genre will ever stop being maligned (it’s mostly for women, by women, so of course it is), but I’ll always be a fan.

I found out about this book through Smart Bitches, Trashy Books. If you’re curious about the romance genre, give it a read!

Nail polish: Heart and Coal by OPI (this is from their 2020 Holiday Shine collection, though it’s my go-to Halloween color)