Book 56 of 52: Murder, She Wrote: By the Time You Read This I’ll be Gone by Stephanie Kuehn 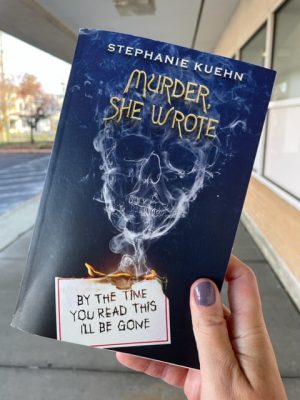 My exploration of the Murder, She Wrote universe continues! Did you know there’s now a YA branch of the Jessica Fletcher world? I didn’t either By the Time You Read This I’ll be Gone by Stephanie Huehn, the first entry into a series of books about Fletcher’s great great grand niece, dropped last month. It’s an interesting endeavor.

The protagonist here is Beatrice Fletcher, a high school student and anonymous contributor to TrueMaine, a true crime blog. This particular mystery starts when her friend Jackson, who has been struggling with his mental health, disappears. He’s not the only child of Cabot Cove’s upper crust to have gone missing either. Are these disappearances connected? Is the local elite boarding school involved? What about an all powerful homeowner’s association that has advocated for more surveillance to keep their residents “safe”? And is it all possibly tied an old cold case involving a mayor’s daughter, one of the few crimes the town’s world-famous mystery writer/sleuth has not been able to solve?

Unlike the adult Murder, She Wrote novels, this is not a cozy murder mystery. By The Time You Read This I’ll Be Gone addresses issues like child abuse, grief, addiction, economic inequality, the police state, and racism (Beatrice’s mother, who died of breast cancer, was Black and Mexican, and Beatrice is one of the few non-white people in Cabot Cove). Instead of the beloved original characters sliding forward in time, as they have in the grown up versions, those characters have aged or died. Jessica is still alive, but housebound (and her living isn’t so unrealistic considering Angela Lansbury died on October 11; this book was published on October 4).

It’s almost like instead of doing one, united Marvel Cinematic University, the owners of the Murder, She Wrote IP have gone the DC route which (as of right now) has separate film and television versions, where different actors play different characters that do different things in each (I emailed the author and haven’t heard back yet – I’ll update if I do!)

It’s not a bad idea, nor is giving the YA series a different tone, though I was surprised by it. But that’s my bad: I also missed that the cover features a giant skull on a dark background. Also, events happening in this book seem like they’ll carry over, which is another change. Kuehn dropped little mysteries along the way, like what mysterious research project is Fletcher’s father working on? And what will be the fall out of finding what really happened to the mayor’s daughter? I’m curious enough that I’ll keep an eye out for book two.