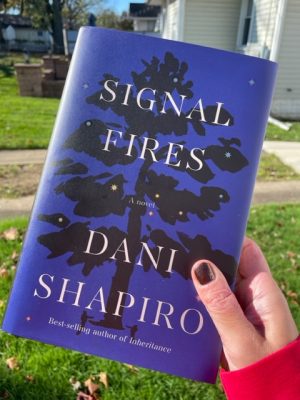 Signal Fires, a new novel by Dani Shapiro, starts with a death. Sarah Wilf, 17, is too drunk to drive, so she asks Theo, her 15-year-old brother, to drive for her. He ends up crashing into a tree in front of their home, which kills their friend Misty, who was a passenger.

Signal Fires is about the after, and how secrets can be an acid that rips someone apart. The story focuses on the Wilfs, and also the Shamkmans, who move into the house across the street once Sarah and Theo have flown the nest. At the accident, Sarah lies and said she was driving, to protect Theo. Their father Ben, a doctor, rushes to the scene. He knows Theo wasn’t driving, but sticks to the story Sarah has made up.

Even though she did it as an act of kindness to keep Theo out of trouble, it plants a corrosive seed, as does a handful of other secrets and lies the characters keep to themselves.

“The words that might have been spoken will instead be swallowed. Unexpressed, they will wind their way through and around each of them like vines choking a stand of untended trees,” Shapiro writes.

It’s not a surprise that Shapiro tackled the topic of secrets. I wrote about her in the review of The Vanishing Half, which was book 17 in this series. Both her podcast and memoir look at what secrets can do to someone, even someone who doesn’t know the exact secret, but that something is off. That’s exactly what Signal Fires is about, but in fictional form.

It is a very sad book. That doesn’t mean it’s a bad, but it was heavy reading — and I’m still thinking about it. It’s also an example of how something that’s not the big part of the story can hit a specific reader in a specfic way, and by that I mean me.

Waldo, who is the son of the younger couple that moves in across the street, almost dies at birth but lives because Ben Wilf intervened (the story is not told in chronological order, and this comes after he’s already introduced in the story, so it’s not a spoiler). I too almost died at birth, and while this wasn’t really a secret, my dad tried and still tries to paper over it with jokes. When I was little, he’d say that I was really the twin of my older brother, but doctors froze me until they figured out how to fix me. Or he’ll tell the part of the story where I was so big that the hospital didn’t have an incubator big enough to fit me and had to send out for one; or that he had no trouble picking me out of the lineup of NICU babies because it was all preemie and one giant — “a Gulliver in the land of Lilliputians.”

I never really really thought about what this one turn of fate meant until recently. I’d been a day, two days old. Other than having some vision problems possibly caused by receiving oxygen as a new born, it’s nothing, right?

But then I cried when I read this passage, told from the perspective of Waldo’s mother: “She knows that she and [her husband] both carry in their lonely hearts the shadow story — the one where Benjamin Wilf was not across the street unloading groceries from his car, the one in which the ambulance came too late. The one in which Waldo Shankman did not live to become this strange and serious, miraculous boy.”

Phew. This is probably not a story I’d tell if I were reviewing Signal Fires for a newspaper or magazine, but it’s the thing I’ll remember most about it long after I’ve shelved it away (and, no, I’ve never written about my birth story; I may in the future now that I’m walking down this path). Funny how literature does that to you.