Book 61 of 52: The Unexpected Inheritance of Inspector Chopra by Vaseem Khan 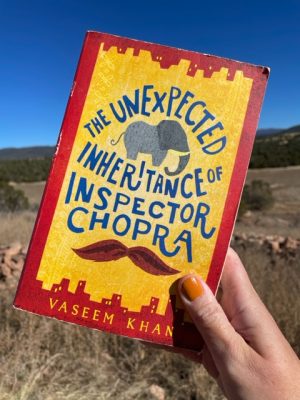 When Inspector Chopra retires, he receives an unusual inheritance: a baby elephant. He can’t figure out why his uncle left him the animal, but he doesn’t have much time to figure it out. Despite the early retirement due to heart problems, he has one final case he can’t shake. What was initially ruled an accidental drowning doesn’t appear to be so, and in tracking down what really happened, Chopra uncovers a much bigger web of trouble running through the city of Mumbai.

That’s the set up for The Unexpected Inheritance of Inspector Chopra by Vaseem Khan, but this cozy mystery didn’t do it for me. It doesn’t really come together until the last 50 pages. The separate stories of this case, what to do about the elephant, and the strain in Chopra’s marriage all feel like they’re plot lines floating around each other, to the point that I wondered why they were even in the same book.

This is the first book in a series, and maybe it’s because Khan had to do a lot of world building, but there was just too much warming up. It didn’t grab me enough to make me want to read the follow ups.

I finished this last week but have put off writing the review because I didn’t know what to say. But there’s another book waiting in the wings for its turn on this meager spotilight, so ahead we go.