Book 62 of 52: The Secret Apartment: Vet Stadium, a surreal memoir by Tom Garvey 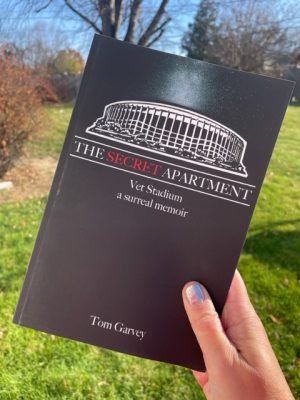 Tom Garvey came home from a the Vietnam War with PTSD, and was trying to figure out what’s next while going to college and working for his uncle helping to manage parking at sporting events in South Philadelphia. When said uncle gave him the business to manage — and after he and his friends crashed at Veteran’s Stadium the night before the Pope’s visit, so they would be on site early to help manage parking — Garvey decided to move in.

In The Secret Apartment: Vet Stadium, a Surreal Memoir, Garvey finally tells a story that he said was only known by a small group of friends (including some professional athletes). He claims that from 1979 to 1981, he lived in an unused concession stand under the slope of section 354 at Veterans Stadium. He took full advantage of his living quarters, making friends with professional baseball and football players and coaches, going to a zillion games, roller skating around the stadium at night, and sometimes sleeping under the stars from the fabled 700 level.

Garvey started posting his memories during the pandemic, for fun and the entertainment of other people, then self-published them in this book in 2021. And it’s good! He probably could have used an editor to keep the narrative more focused, or maybe re-arrange the order of some of the essays, but other than that, he’s a very skilled writer. It’s well done. Of coming home from Vietnam, he writes “My closest friends were new friends, people I met after the Army who had no frame of reference as to my personality before and after. They had no history with me and were not disconcerted by any changes. Some old friends drifted away. To be fair, they came by their discomfort honestly. They didn’t know me anymore, but it was equally true I didn’t know myself.” He also includes “Southern Wind,” a poem he wrote during the time, which is one of the best “home from war” poems I’ve read.

Now. The question is: did he actually do it? Both the Philadelphia Inquirer and New York Times tried to find out. Four people said they remembered the apartment, but most of the folks mentioned in the book are dead. I tend to believe him. The book is so detailed, including his concern about the cats that lived in the Vet when the stadium was imploded, that it would be hard to fabricate. A friend who knows more about Philadelphia and Philadelphia sports than anyone I know thinks he made it up.

Either way, it’s a fun, zippy read, especially if you love nostalgia about Philadelphia sports. And yes, it would make a good holiday gift if you know someone else who does.