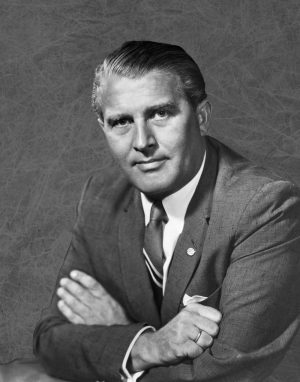 First the serious one: this review is in part about the Holocaust. If you want to skip it given everything that’s going on right now, I completely understand. I also put warnings in the post about where the rough stuff is. It’s also why, after looking at the post after it published, I changed the featured image. I don’t think anything’s wrong with the cover, but I don’t want to shove a hate symbol into your day, especially during Hanukkah.

Second, the less serious note: this post discusses the first season of the Apple TV+ show For All Mankind and will contain  mild spoilers. That bit comes at the end of the post, and I’ll give another warning with {SPOILERS AHEAD}.

And those “what those scientists dids” were often a lot. Two examples {this gets specific, so if you need to dip out, now’s the time}:

Wernher von Braun was an SS officer and the creator of Germany’s deadly V-2 rocket. Not only were they created to obliterate Ally cities, but they were also built by using the forced labor of concentration camp prisoners. Through Operation Paperclip, he was brought to the U.S. and essentially ran the space program. He also operated an intense public relations campaign to portray himself as someone who wasn’t really a Nazi, but just happened to be in the wrong place at the wrong time — he didn’t mean it, honestly! It worked, to varying degrees of success while he was alive. Disney even did an episode of the Disneyland TV show. But von Braun wasn’t able to completely hide his past (nor was the program entirely a secret either — Albert Einstein and Eleanor Roosevelt spoke out against it while it was happening). Comedian and musician Tom Lehrer wrote and performed song about him in 1965. Von Braun was probably, partly, the inspiration behind Doctor Strangelove. He was almost almost awarded the Presidential Medal of Freedom, before one of Gerald Ford’s senior advisors wrote they shouldn’t, because he was a former Nazi. But it wasn’t until 1985 that CNN journalist Linda Hunt started cracking the story wide open. Here he is, sometimes in uniform, sometimes next to Adolf Hitler. Despite this, NASA and those who benefited from von Brauns’ work, still haven’t completely turned their backs on him. His bust was put up in front of NASA’s Marshall Space Flight, which was dedicated in 2019. And here’s a 2021 press release from NASA that speaks about him with reverence. It’s gross.

Hubertus Strughold was head of Germany’s Research Institute for Aviation Medicine. In 1942, he attended a medical conference in Nuremberg that included presentations on medical experiments done on concentration camp prisoners. These tests included operating on people without anesthesia, freezing them alive to see if they could be revived, and locking them into air pressure chambers to see what happened. These were people Nazis labeled “untermenschen” — sub-human (and yes the parallels with how right-wing assholes talk about the LGBTQIA+ community, especially trans people, is SCARILY SIMILAR). Strughold claimed he didn’t know that prisoners were being murdered in the name of “science.” But a 2004 investigation uncovered evidence that he performed oxygen deprivation experiments himself. Despite all this, he was appointed chief scientist NASA’s Aerospace Medical Division in 1962. Until 2012, the Space Medical Association gave out a prestigious award in his name and honor. They seemed pretty pissed about being pressured into nixing it (here’s a Wall Street Journal on the whole thing — with a warning that it contains photos of some of the Nazi experiments).

They’re not the only two. The whole thing is infuriating.

So why did the U.S. do it? Why did they welcome Nazi scientists into the fold? Because the U.S. both wanted their technology and didn’t want them to work for anyone else, particularly the Russians. The Cold War and Space Race papered over everything. Jacobson, who was a finalist for the Pulitzer Prize for in 2016 for The Pentagon’s Brain: An Uncensored History of DARPA, America’s Top Secret Research Agency, is meticulous in her recounting of everything known about Operation Paperclip up until the book as published in 2014, including the fall out of not only bringing Nazis into the U.S. but in some cases elevating them to the highest roles possible in government scientific endeavors. The audiobook is more than 19 hours long, and I felt nauseous while listening to parts of it, especially as I did so at the same time that that rapper made those comments about Hitler on that show (you know the one. I don’t think I need to be more specific). It’s not hard to see that outburst and link it back to the U.S. government giving Nazis safe haven after WW II.

{SPOILERS AHEAD} I didn’t know about von Braun, or any of this, until I watched For All Mankind, a TV show that asks what would have happened if Russia got to the moon first. Von Braun is a supporting character in the first season, and in that universe, he is exposed as a former Nazi who knew about exactly how the V2 rockets were built while still alive. The episode “He Built the Saturn V” dropped on November 1, 2019, seven months after  NASA put his bust in front of their new building.

I came across Operation Paperclip (the book) while looking for a biography of von Braun — I was ashamed that I didn’t know about any of this before. But this also shows how science fiction can teach us more about our world by showing us a reflection of our reality. For All Mankind is very good at this, and also completely addictive. The tl;dr is that, in the wake of losing the space race, the U.S. decided to harness the intelligence, brain power, and talents of all of its citizens, not just the white men. Things look really different. It’s not a utopia, but I wouldn’t mind living in that reality for a while.

Before I conclude, a meme: 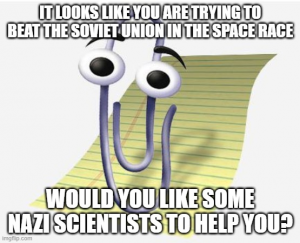 And a few additional resources: