Book 1 of 52: The Winter Guest by Pam Jenoff 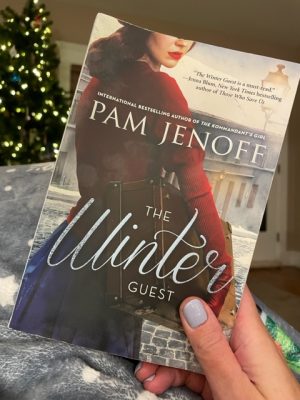 Happy New Year! With the turning of the calendar starts a new year of book reviews. Writing this blog last year was a joy, and a much needed kick in the pants to get me to think about writing for writing’s sake — and not writing just stuff I was being paid for (though I do have a tip jar, and I get a cut if you order any books from the links, just putting that out there!) So here I am again, ready to read another 52 books (or so), while matching my nail polish to the covers, and writing about it all here.

First up for 2023 is The Winter Guest by Pam Jenoff. She writes historical fiction surrounding World World II, with an informed point of view: before becoming a best selling author, she worked as Special Assistant to the Secretary of the Army and then for the State Department where, for a time, she was assigned to the U.S. consulate in Krakow, Poland.

It was that work that informed The Winter Guest, which is about twin sisters living in a fictional rural town outside of Krakow in 1940. After their father dies and their mother is hospitalized, the sisters are in charge of keeping themselves and their three younger siblings safe and fed, which was not an easy task. The Germans invaded Poland in 1939. The sisters, like most people, were living under tight rationing, and were only vaguely aware that something was happening to the Jewish population in the country. They kept trying to keep their heads down and ignore rumors they overhead at the local market, including horrific things said by other people there about their Jewish neighbors (which unfortunately are still said by bigots today). When Helena, one of the sisters, discovers an injured American soldier in the woods near their home, that view of the reality of what was happening, and about to happen, changes.

I’ve read most of Jenoff’s books leading up to this one, and they get better over time, as her skills as a writer and storyteller improved. Still, these are melodramas, with some twists that I wouldn’t be surprised to find on a soap opera. That of course is fine, especially for a book published by MIRA, which is a non-romance division of Harlequin. But it’s something to know going in because it may or not be for you.

I learned about Jenoff because she’s local to me. Inkwood Books, which is my local bookstore, has been her champion. I saw them post about Jenoff’s new book, Code Name Sapphire, which is coming out next month, which reminded me that I still had one of her titles on my to-read shelf. If you’re looking to try one of her novels, I suggest starting with The Kommandant’s Girl, which came out in 2018.

Nail polish: I Am What I Amethyst by OPI.