Book 2 of 52: Murder, She Wrote: The Maine Mutiny by Jessica Fletcher and Donald Bain 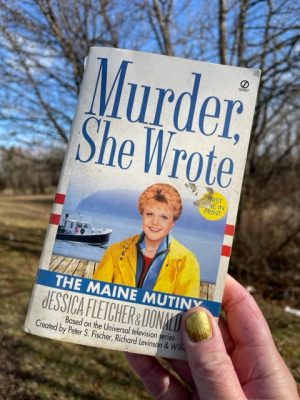 That’s the middle of this story, which then jumps back to what lead to be a controversy among lobstermen in the first place (and it is ALL men here), then to Fletcher being stuck on the boat, and of course unraveling the mystery of how she got there in the first place.

It’s…fine, as were the other books I read in the series last year. They’re a fine way to pass the time without breaking your brain, especially if you’re okay was sometimes floral writing. One example: “Although the evening was arm enough for a shirt alone, he wore a leather jacket with the sleeves pushed up, revealing tattoos on both forearms. There was a sharp crease in his trousers and a high shine in on his intricately patterned cowboy boots.” Not Pulitzer Prize worthy, but I don’t really expect that — would you?

I did laugh at the big where Fletcher says there’s not much crime in Cabot Cove. She solves a murder a week (or murder of the book) and there’s no crime? In 2021, a fan theory floated around the Fletcher was a serial killer. This all reminds me of the Madam Blanc Mysteries, a British show where people are murdered left and right in this small south of France town when she shows up, and no one even thinks she might be involved.

And if you’re just tuning in (and because it’s still a fun fact) “co-writer” Bain is a former airline publicist who previous pretended to be two 20-something flight attendants behind Coffee, Tea or Me? books. At least his name is on that cover now.

Also, I did confirm with Stephanie Kuehn, author of Book 56 of the 2022 series By the Time You Read This, I’ll Be Gone, that the YA Murder, She Wrote books live in a different literary universe than the still ongoing adult books. I expect to be writing a piece on that later this year!

I promised a friend she could pick my nail polish color if she got her COVID booster, which is what lead me to pick this book, according to her whim to make my nails a glittery gold, and match a book to it. Have you gotten your booster? Please do!