Book 3 of 52: Elizabeth Taylor: The Grit & Glamour of an Icon by Kate Andersen Brower 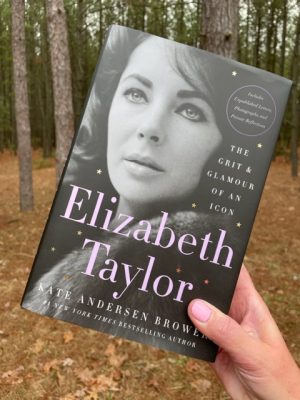 How about some glamour, darlings? Then let’s dive into Elizabeth Taylor: The Grit & Glamour of an Icon by Kate Andersen Brower.

This new book is the third biography I’ve read of Taylor. Furious Love: Elizabeth Taylor, Richard Burton and the Marriage of the Century by Sam Kashner and Nancy Schoenberger is a biography of Taylor and husband number five (and maybe six, depending on how you count, as they divorced and remarried then divorced again) with a focus on that relationship; and How to be a Movie Star: Elizabeth Taylor by William J. Mann is a supremely dishy read. I enjoyed them both, but Elizabeth Taylor: The Grit & Glamour of an Icon is by far the most comprehensive of the three.

Brower had access to unpublished letters, but she also talked to everyone — and I mean everyone. A short list: Carol Burnett, George Hamilton (yes they dated!), Brook Shields, George Hamilton, Anthony Fauci, John Travolta, Colin Farrell (who was a close friend), all of Taylor’s children, Richard Burton’s daughter Kate and his wife Sally. Brower said that 10 years after Taylor’s death, people were more willing to talk about her. The last few chapters feel like a bunch of people sitting around and telling their best stories about a person they loved who they all still missed. Those interviews alone make this worth reading.

There’s too much to say about Taylor’s life — which is why I think you should read this one! — to share here, but some highlights:

I used to say that I’d love to see a biopic of Taylor and Burton filming Cleopatra in Italy at the start of their romance but I’d be much more interested in the Taylor and Reynolds. What a story that is.

So yes I enjoyed it! I tore through the book in a few days. And if you’re not up to a Hollywood biography, I’d recommend checking out Brower’s The Residence: Inside the Private World of the White House. She takes the same high level, deeply researched, talk to everyone who will talk to her approach to the people who make the White House function as a home. A very different kind of home — but still a home.